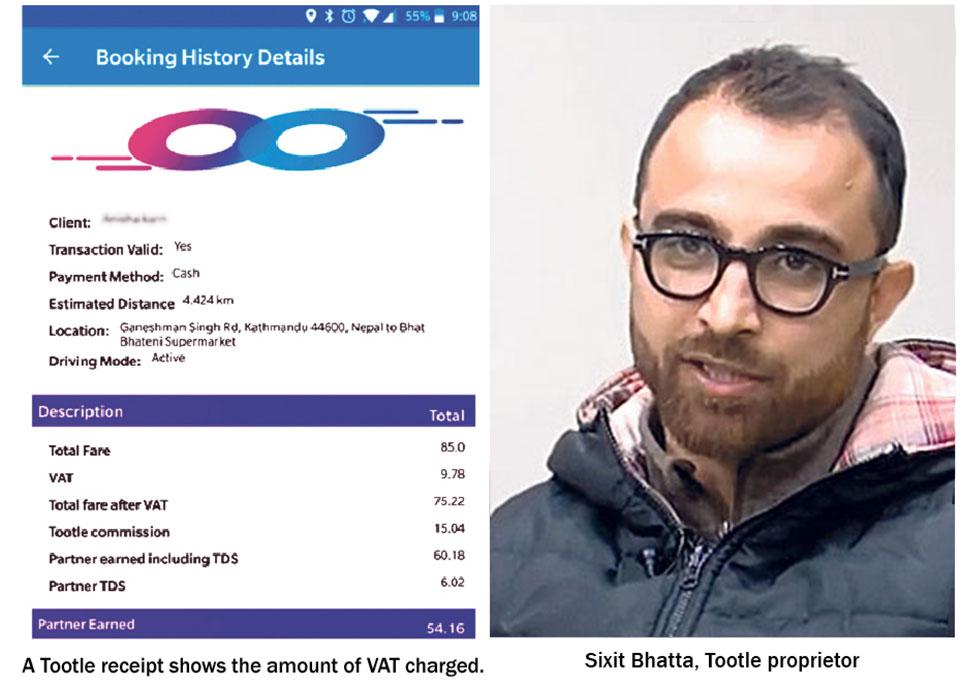 KATHMANDU, Jan 23: Tootle, a ride-sharing service provider, is found to have collected 13 percent Value Added Tax (VAT) from riders for 19 months but without paying the tax to the government.

According to sources knowledgeable about the company’s financial transactions, Tootle collected VAT from riders since its inception in January 2017 to July 2018.

However, the company is found not even registered at the department concerned as a VAT paying company. Sixit Bhatta, chief executive officer of Tootle, told Republica that the company is currently in the process of registering for VAT.

The booking history from the Tootle mobile app shows the company charging Rs 9.78 as VAT for a total fare of Rs 85 for a shared ride of 4.4 kilometers. Of the total, the Tootle commission is Rs 15.04 while the partner earns Rs 54.16 after Tax Deducted at Source (TDS) of Rs 6.02. Bhatta claimed that the company has been paying the TDS.

Bhatta further claimed that the company collected VAT in the initial stages due to lack of knowledge about the tax system.

“Since we were a start-up, we did not know about the tax system,” he said, “We realized our mistake after consultations with chartered accountants and then stopped collecting VAT.”

The booking history in the company’s app from July 2018 onward does not show VAT being deducted from earnings.

However, a source claimed that the company is still extracting VAT from riders. “Tootle is still collecting VAT,” the source said.

Tootle has been found using the same payment model as the one for deducting charges from riders but it has now stopped showing the details of transactions.

“We used the VAT head before, but we do not have it now,” Bhatta said. “However, the total charges we deduct have remained constant.” That means the partner still receives Rs 54.16 if Tootle charges Rs 85 for the 4.4 kilometer ride.

Asked what happened to the amount collected as VAT during the 19 months, Bhatta said he had to check with the company’s accounts.

Bureaucrats have condemned the conduct of the ride-sharing company as illegal. Secretary at the Prime Minister’s Office and former revenue secretary Shishir Kumar Dhungana said, “It is a crime if a company collects VAT from users without registering for VAT.”

Similarly, former finance secretary Shanta Raj Subedi said that such tax evasion can result in a jail term and up to 100 percent refund of the evaded amount. “The department concerned will access the VAT amount and make the company pay up to 100 percent of it as compensation,” he said, “The company operators may also have to serve a jail sentence.”