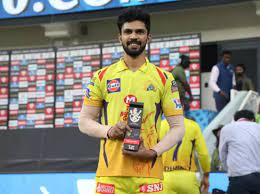 RCB vs CSK- 3 CSK Players Who Can Win The Man Of The Match Award, IPL 2021 Match 35. The return fixture of the game between CSK and the RCB is set to take place in IPL 2021 in Sharjah and CSK will start as the favourites to win the contest as well.

The reason simply being that RCB had glimpses of finding their best combination in the first phase of IPL 2021 but it has started to falter as well. RCB has been playing a lot more all-rounders in the squad and it has reduced the specialist players significantly.

On the other hand, CSK has been able to get over the line from tough situations and has looked very clinical in its approach as well. The contributions have come from all departments and it has been a united team effort that will certainly help their standings. It is time to look at 3 CSK Players Who Can Win The Man Of The Match Award against RCB.

Ruturaj Gaikwad has been the man for the CSK so far with some excellent outings and he showed his class in the previous game against Mumbai as well. He stepped up for the team when the whole side was in disarray losing early wickets and it needed big innings from the youngster. Gaikwad impressed everyone once again with an unbeaten 88 and his acceleration in the final overs against bowlers like Jasprit Bumrah was something extraordinary.

The opener had a fantastic season in the previous edition in UAE where he kept contributing in every game towards the end and continued his good form straightaway. He has made his debut for India as well and he is already looked into as the future of the side. Ruturaj Gaikwad will be one of the contenders for the man of the match award.