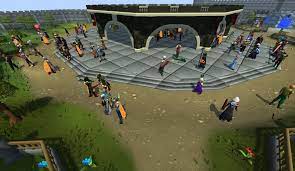 Steamforged Games' partnership with Jagex is the latest in a series of partnerships that have brought the biggest gaming franchises into a tabletop-based environment. The tabletop gaming juggernaut has made board games that are based on popular series such as Monster Hunter World and RS Gold Dark Souls and most recently launched the most successful Kickstarter campaign for the Resident Evil 2 board game with over 1 million GBP raised earlier in the year.

Now, the developer is aiming at Gielinor's world as well as RuneScape and is planning to launch two board games and an RPG core book that can be played on tabletops this year. The two RPG versions will include many of RuneScape's most popular characters and locations, allowing a group of five or more players to compete against classic quests from RuneScape and bring the adventures in Gielinor to life. Gielinor to the home of Gielinor.

Players can create and upgrade equipment, engage with NPCs and tackle many side missions inspired in the traditional MMORPG. The board game will launch through an Kickstarter campaign later this year, while the tabletop RPG book is set to go on sale immediately.