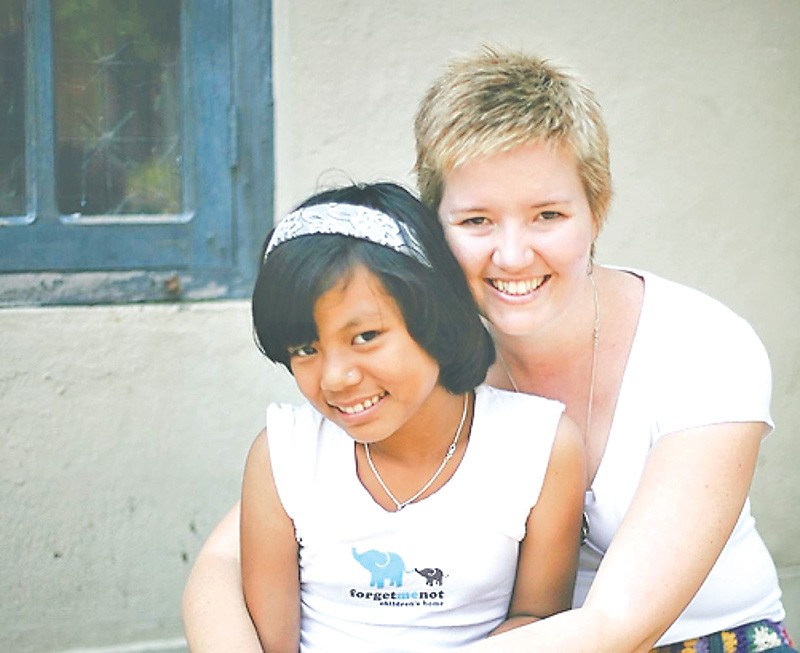 Forty Australians have been duped into donating more than $480,000 to a charity scam that coerced children into a fake orphanage.

The Australians were fooled into thinking they were supporting Nepalese orphans when, in fact, the children were not orphans at all.

Aussie donor Mel Manley with some of the Forget Me Not girls.Source:Supplied

The non-government organisation, Malai Na Birisu Bal Griha, hired child traffickers who manipulated illiterate parents in poor areas of Nepal and stole their girls away from them to live in a Kathmandu orphanage funded entirely by Australian donations.

Neither the Australian charity partner nor the donors had any idea about the scam until years later.

One of those donors was Jason Wall, 52, who donated $60 a month to sponsor a child named Sangeeta. When he was told of the scam, he felt a mixed bag of emotions. “There was both shock and sadness,” he said. “You just question — how the hell did this happen?”

Mel Manley with one of the girls from the Nepalese orphanage.Source:Supplied

Craig Manley, 51, and his wife Mel, 48 who run a McDonald’s in Bundaberg, felt “hugely deceived and disappointed” when they discovered the details. “My wife and I visited the orphanage every year, armed with presents — make-up, hair clips and cards from other donors like us saying how much the girls were loved,” Mr Manley said.

In addition to the orphan deception, another nasty shock was waiting the Australian donors.

“We discovered those gifts were stripped from the girls and either sold off or distributed amongst the orphanage staff’s families,” Mr Manley said, adding that the staff refused to return a TV and table tennis table he’d intended for the girls. “Not all the money we donated went to the kids either. They were skimming off the top. We discovered falsified budgets.”

The couple heard “murmurings” that people had arrived at the orphanage claiming to know the girls, but were told they were turned away “for security reasons, to protect the girls”.

“There was a twinge in the back of my mind thinking, I wonder what that’s about?” Mr Manley said. “We were later told the kids were threatened that if they told us mum or dad showed up at the front door, there’d be retribution, they’d be cast out on the street.”

It wasn’t just the donors who felt cheated. Forget Me Not chief executive officer Andrea Nave said she was “shocked and angry” at the discovery. “I thought, we have a huge problem here,” she told news.com.au. “I can’t imagine my children (she has four daughters) being separated from me and desperately wanting me to find them.”

Forget Me Not now works to reunite falsified orphans with their families. When the Manleys saw this “excellent work”, they actually substantially increased their monthly donations of $1000 a month to the Australian charity.

Craig Manley and one of the so-called orphans.Source:Supplied

Before becoming CEO, Ms Nave ran the charity’s “sponsor a child” program, facilitating communication between the donor and the child. She had to call all 40 donors and tell them the outrageous truth. “I was very transparent, telling them what we’d discovered without hiding anything,” Ms Nave said.

Forget Me Not was founded by Lars Olsen, who was inspired to set up the charity after seeing the poverty and orphaned kids in Nepal on a backpacking trip.

When he returned home to Hervey Bay, Queensland, he set up the charity with his sister and a friend. A year later, he persuaded Ms Nave, who he knew from acting school, to join.

Forget Me Not Australia now works to reunite the Nepalese girls with their families.Source:Supplied

Forget Me Not Children’s Home was set up for six little girls in 2006. Over several years, and with financial support from the Hervey Bay community, it grew to support 21 girls. But none of them knew the nasty shock in store.

Their intentions were honourable. “We focused on Nepalese girls because they’re often denied an education and vulnerable to sex trafficking” Ms Nave said.

She was told the six orphaned girls were an overflow from overcrowded, dysfunctional orphanages. “They were malnourished and we were told they were sisters. We were even given the death certificates of their parents,” she said. She now knows these were falsified documents.

The shock was eventually discovered when Eva, an American who spoke Nepalese, was hired in 2009 to work at the orphanage, wholly funded by Hervey Bay residents.

“Eva had been making notes and said ‘look at the things these kids have been saying, I’ve been writing it down’,” Ms Nave said. Eva had done some detective work to piece together a jigsaw that led to a horrifying conclusion.

“Phrases would crop up like ‘I want to go home’,” Ms Nave said. “Then, as Eva built more trust with the girls, they’d reveal more. ‘I want to see my brother,’ one would say. Then eventually, ‘I miss my mum’ and ‘I’m not an orphan’.”

Some of the children who were placed in the orphanage.Source:Supplied

“The board of the Nepalese NGO we partnered with knew full well where these girls came from. They were trafficked, coerced into it,” she said.
She says false pretences were used.

“A child collector went through the remote, poor districts and offered kids a better education. Illiterate parents would sign a document they cannot read or understand with the press of a thumb. Their children were being given away and they didn’t know. Each trafficker got around $A1500 per kid — poor families would cobble together the money.”

Malai Na Birisu Bal Griha is still registered with the Nepal Government’s Social Welfare Council, although with no activity.

At the point the truth was uncovered, there was a split in the organisation that is now Forget Me Not Australia. Ms Nave has since dedicated her life to tracing the girls’ real families, reuniting them and supporting them to get a decent education and standard of living.

But Mr Olsen, who won Young Queenslander of the Year and the Premier’s Award for his efforts, dissociated himself from the organisation he’d set up and his parents stopped sponsoring children.

“He felt too deceived that these kids weren’t orphans. He was also of the opinion the children were better off in our care, not with their families,” Ms Nave said.

But Mr Olsen disputes this point.

“I 100 per cent supported the decision for the girls to be reunited with their families, especially if we could get them a safe house and continuing education in the meantime, while we searched for their parents,” he told news.com.au.

He fully supports the charity’s work.

“Reflecting back, I genuinely believe the organisation is changing lives for the better and doing terrific work,” Mr Olsen said.

Donor Jason Wall said: “Things evolved so quickly. Lars was young. He still had lots of learning and growing up to do. He was baffled, bamboozled and shocked.”

Forget Me Not Australia now reunites children with their families, asking from village to village through the foothills and valleys of Nepal, then stays in touch to support them through any hardships.

Australia became the world’s first country to recognise orphanage trafficking as a form of modern-day slavery this month. Statistics show 80 per cent of supposed orphans have one living parent and Asian orphanages are trafficking to meet volunteer demand. It’s a phenomenon known as voluntourism. The 2017 State of Children report revealed there were 567 registered childcare homes still in Nepal housing 16,536 children, but there was also an unknown number of unregistered homes.

A Rethink Orphanages spokesperson encouraged Australians to direct their money to families, rather than orphanages.

“Donors and volunteers who have unwittingly been supporting the orphanage industry can play a key role in raising awareness of this issue, and advocating for family-based care for children rather than orphanages,” the spokesperson said.

It took 18 months for Forget Me Not Australia to successfully reunite the traceable families of 18 of the 21 girls.

“I now think it’s too easy to open a charity in Australia. Anyone can do it. You don’t need any skills or experience. We were just average people, trying to do the right thing,” Ms Nave said.

17
Please log in to like, share and comment!
Categories
Read More
Business
Where To Buy Tolix Chairs Wholesale
Tolix Chair Tolix is one of the manufacturers of steel furniture and has become a symbol in the...
By Will Pastons 2020-02-26 03:19:35 0 223
News
Mannheims Patrick Glöckner after 3: 3 against Osnabrück
Game of Thrones [Gem UV ɹɹOʊNZ], likewise called the iron throne (according to the French title...
By KemmerPhoebe Guadalupe 2021-11-22 04:57:50 0 26
Business
Barbershoap Salon Furniture in Vancouver, Canada - Kingdom Beauty Supplies
The styling barber chair is the most important equipment in your store because it will be...
By Will Pastons 2020-07-16 02:02:11 0 190
Home & Gardening
Working down Patriots working again Rex Burkhead final outputs versus scrimmage
Saturday evening at Gillette Stadium, Rex Burkhead occupation-higher 77 getting yards were being...
By Barber Fdsfds 2020-01-13 00:32:49 0 270
Other
Noida Independent Female Escorts Service
Fun and pleasure have become the common remedies for most of the people from all around the...
By Delhi Escorts 2021-10-01 05:50:59 0 39