What Household Appliances Are There? 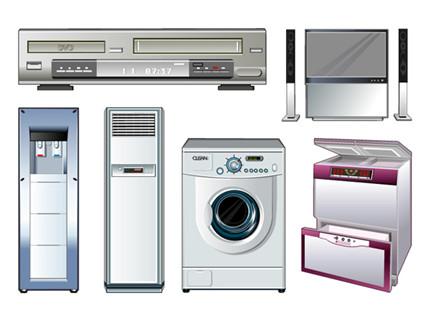 Induction Cooker Household Appliances
Induction cooker is a new type of stove made by applying the principle of electromagnetic induction heating. It is different from gas stoves, microwave ovens, electric stoves and other traditional stoves. It has no open flames during operation, does not increase the ambient temperature, does not consume oxygen, and does not generate harmful gases such as carbon dioxide There is no microwave radiation harmful to human body, and there is no danger of leakage, explosion, burns and the like that gas stoves often have. It is very popular in Europe, America, Taiwan, Hong Kong and other places. It has become the main stove for home cooking and is widely used by commercial restaurants such as hot pot restaurants.
1. Induction cooker heats food. Frying, frying, cooking, steaming, and roasting can be performed directly. It conforms to the cooking habits of Chinese food, and has a small size and beautiful appearance. It can be placed and used at will in kitchens and restaurants.
2. Induction cookers use pots made of ferromagnetic materials, such as iron pots, enamel pots, and stainless steel pots, and require a certain horizontal area at the bottom.

Nutrition Egg Boiler
For children, eating a boiled egg a day is very beneficial to the growth and development of children. However, the eggs produced by different methods are not the same.
The traditional method of boiling eggs is to cook raw eggs without considering the nutritional status of the eggs and the old and tender tastes. Eggs cooked with egg boilers can provide targeted eating methods for children at different stages.
1. When using, please place the egg cooker at a basic level. Fill the measuring cup with the water you want to control. The number on the measuring cup represents the number of eggs. The scale is divided into "old", "medium" and "tender". This type can be cooked with water according to taste.
2. Put the boiled egg rack after adding water. In order to prevent the egg from bursting, use the provided egg needle to poke a hole in the round head of the egg. Put the egg in the boiled egg rack with the piercing hole facing up and cover the transparent lid.
3. Plug in the power and turn on the egg cooker to enter the automatic heating control process. During the cooking process, steam will escape from the ventilation holes on the top of the transparent cover. Do not bring your face close to the ventilation holes to avoid accidents. Do not open the lid during the egg cooking process to prevent steam from hurting people and the steam leakage will affect the effect of steaming eggs.
4. After cooking, the egg cooker will automatically stop heating and emit an electronic buzzer, which indicates that the eggs have been cooked as required.