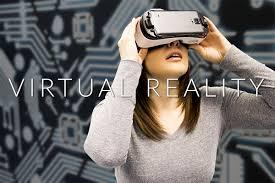 Virtual reality (VR) is a technology which allows a user to interact with a computer-simulated environment, be it a real or imagined one.

Most current virtual reality environments are primarily visual experiences, displayed either on a computer screen or through special stereoscopic displays, but some simulations include additional sensory information, such as sound through speakers or headphones.

The simulated environment can be similar to the real world, for example, simulations for pilot or combat training, or it can differ significantly from reality, as in VR games.