I worked at a different dental office today. This one has a desk that I can sit in. When I wasn’t performing irreversible surgical procedures on human hard tissue, I read. A lot. Between my Instapaper queue and Twitter/RSS, I have had a lot of great things to read.

In between my reading sessions, I decided to do what I always do in these situations: Speedtest the Wi-Fi and cellular download and upload rates. I probably do this at every new location I go to, be it a hotel room, or a friend’s house. I am that guy who asks for the Wi-Fi password not five minutes into the pleasantries session. (Hey, I could be the guy who asks questions for which the answers I care not. At least I’m not him.)

I am usually surprised at just how terrible the in-house Wi-Fi is for both personal friends and businesses; my LTE speeds often trump the local Wi-Fi 4-5x on the downstream, and typically 40x on the upstream.

Today’s situation was no different from the norm. This was my Speedtest today over LTE: Interestingly, Speedtest garnered a mere A- for these speeds. I guess that’s fair, considering the relativity of it all.

Here was a Speedtest from a few months ago, when Time Warner decided to grace its Inland Empire customers with an exorbitant amount of speed increases. (We should totally be okay with them merging with Comcast, right? Uh, no.) 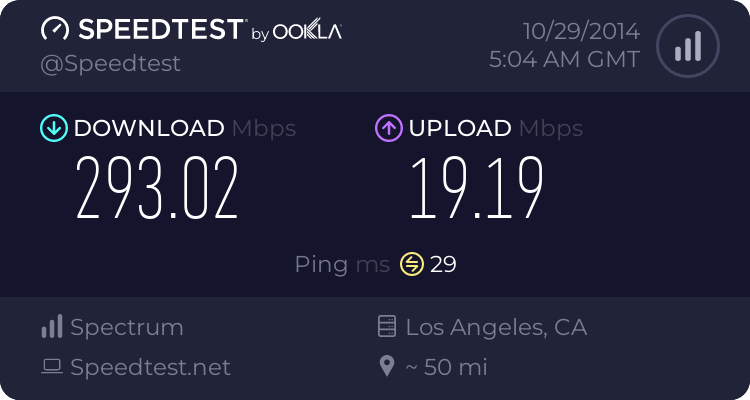 I wrote a piece some time ago that touched on my first experiences with the personal computer.

One thing I did not revisit was the terrible state of internet access in the year 2000 (at least, for my small town in the middle of Central California).

America Online was, without a doubt, the most popular way for people to connect to the internet. Back then it was distributed via compact disc. I know, right? Crazy. It was simultaneously the most ubiquitous and also the most terrible way to connect to the world wide web at that time.

I remember the ‘browser’ window that was America Online. In your mind, think of what Safari/Chrome is for most people, and try to replace that with something like the Yahoo! front page. Yeah, that’s what it was like. That’s how terrible.

Conversely, I also remember how connected it made me feel. I was a sheltered kid, who took more comfort in the confines of his bedroom than he did in the outside world. I wasn’t a weirdo or loaner, mind you, I just really liked Legos and stuff. I suppose I am still like that, to a certain extent.

On the internet, at 12 years old, I became one with the world. I actually conversed with random people on the internet. Looking back, they were probably all sex fiends looking to rape me, like my parents had always feared. But at the time, everyone seemed friendly enough. My parents didn’t know any better, and left alone, I was basically free to explore the internet on my own. I had conversations with people that I can’t really recall, except to say that they were mostly about nothing. It’s surprising I didn’t turn out messed up in the head, because with a truly open internet, I could have searched for any number or weird or strange things. But, as a 7th grader, I don’t think I did. My most exotic searches were for Corvettes and such.

But what I remember the most vividly is so ephemeral for me, and so emotionally charged, I hesitate to even tell you. But I will.

What I most remember about AOL was that perspiration-inducing and absolutely curse-worthy noise that accompanied my quest to make it online.

Does the sight of this GIF

My inclination here is to make a joke about how connecting via AOL was a lot like Forrest Gump’s “box of chocolates,” because it was. There was no predictable pattern. Oh, it’s 5:57 PM, after dinner, and you want to get online? NOPE. Try again. Okay, I’ll try again at 9:03 PM. The parents are asleep, everyone is in their rooms. Who else would be using the phone right now? I should be able to get online now, right? NOPE. Try again. Screw it. I’m not trying again. I’ll try tomorrow. I try again tomorrow. It works after dinner, but still not at night. Next day: broken both tries. The. Endless. Cycle. Of. Suck.

I did everything I could. I tweaked as many settings within Windows XP that I could find. Sometimes it would work, sometimes it wouldn’t. We even got a separate phone line exclusively for AOL. What AOL wanted, AOL got, apparently. It was a real struggle.

When I could finally get online, there was another seemingly unsurmountable obstacle between me and the rest of the glorious world behind the screen. It is a number that begins with 5 and ends in 6, with a k after the 6 to modify the entire moniker. Shorthand, 56k. It was, without a doubt, terrible. Even in 2000, decades before 500 Mbps would be commonplace most everywhere besides the US, everyone knew 56 kbps was terrible. To put that into perspective, at 56k, it would take approximately 298 hours to download a typical iTunes movie in 1080p. (On my connection at home, right now, it would take around 3 minutes to complete a similar download feat.)

When I finally convinced my clueless parents to adopt AT&T’s broadband service called DSL, it was glorious. 768 Kbps never felt so great!

We have become so spoiled in the age of fast internet. Whenever a webpage ceases to load instantly, I immediately assume something is bottlenecking the process. Maybe it’s my CPU, lack of RAM, or, perhaps, my crappy ISP being flakey? Nah, it couldn’t be that last one. Simply put, I couldn’t imagine going back to those times.

But back then, that was just a part of life. Things took time. Imagine loading a dynamic webpage like The Verge on a personal computer 15 years ago, with 56 Kbps as the maximum download speed possible. Yeah, I’m having trouble imagining that scenario as well.

There was so much to hate about the internet back then. The experience was completely lackluster compared to now. It might surprise the generation that follows me just how crazy it was for all of us to endure such technological failwhales.

And yet, at the same time, it was completely awesome.

For the first time ever, I knew more about something than most every adult I came in contact with. Sure, I also knew more about the X-men than the average adult, but knowing more about something like computers? That was cooler. That became a big part of my identity. It has followed me all the way to where I am now. I’m sure there have countless others who share my story of internet discovery. I am the generation that grew up with the internet. Yay internet!

Please log in to like, share and comment!
Categories
Read More
Other
Superior Marble Cutting Machine
The saw cuts the slab as the spindle holding beam advances at a right-angle to the conveyor belt....
By Enxin Cui 2019-11-11 06:16:05 0 191
Other
Pay Attention to Material Composition of Hot Stamping Foil
The first layer of hot stamping foil is the base film. It is composed of biaxially oriented...
By Gaobao Gary 2020-10-26 06:16:56 0 104
Other
Piudina vanda vandai pilayo sathile
]yrfefhjj
By Mahabir BiKa 2021-08-09 05:59:55 0 19
Business
Wrapped V-Belts-Simple And Perfect
Nowadays, Wrapped V-Belts are primarily considered for replacement requirements.The bottom...
By Baihua Ccc 2020-05-27 02:20:51 0 135
Information Technology
bitdefender sign in
Bitdefender check-in at bitdefender sign in Bitdefender check-in is a crucial process that helps...
By Safe Activation 2020-01-20 07:36:41 0 208