T20 World Cup 2021: Virat Kohli Reveals Why Suryakumar Yadav Was Promoted To No.3 vs Namibia

India captain Virat Kohli has revealed why he sent Suryakumar Yadav ahead of him at number 3 in the chase against Namibia on Monday in Dubai, where India emerged victorious by 9 wickets, chasing down 133 to cap off their campaign with three straight wins. 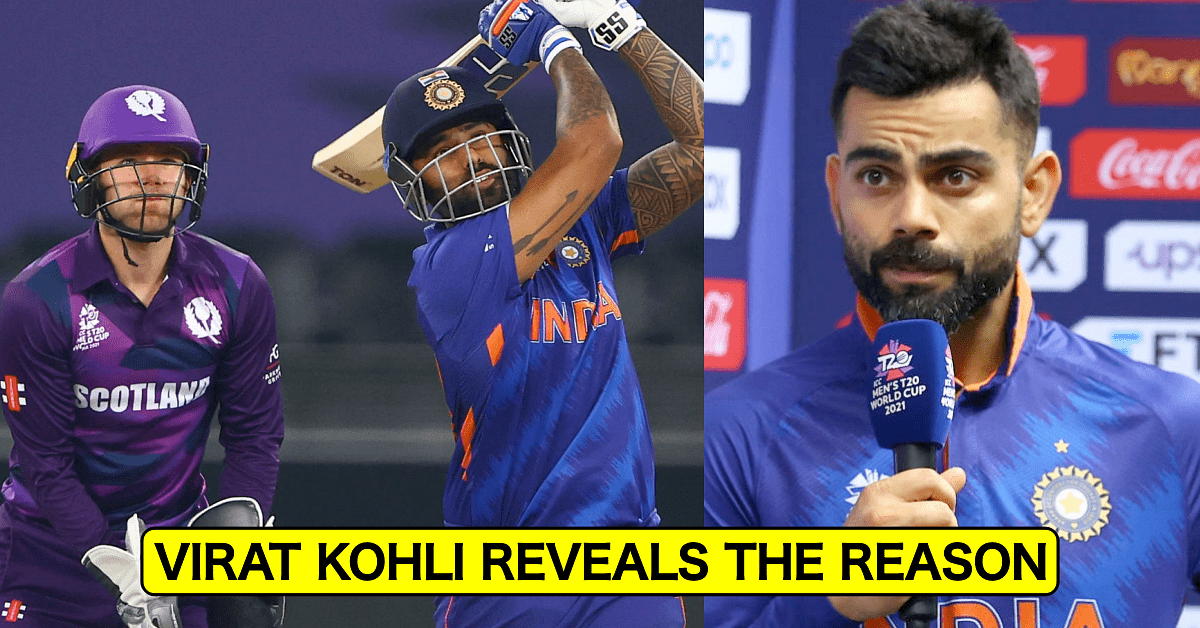 Suryakumar came out after the fall of opener Rohit Sharma’s wicket with 47 runs required off 61 balls. The right-hander smashed four boundaries to score 25 runs from 19 balls and remained unbeaten till the side was over the line. Virat Kohli remained padded up and helmet on in the dugout and didn’t get to bat in his last T20I as a captain.

He highlighted that Yadav hadn’t got much game time playing in his first T20 World Cup and sending him to over himself was to give Yadav “a nice memory” to take back from what has been India’s earliest exit – before the knockouts – in an ICC event since 2012.

“Surya didn’t get much time in the campaign. It’s a T20 World Cup and I thought it might be a nice memory of him to take back. As a youngster, you want to take back some good. So that was the plan,” Virat Kohli said at the post-match presentation.

Suryakumar had played two innings before this game: he scored 11 runs of 8 balls versus Pakistan and 6* off 2 balls against Scotland.

We haven’t got the results here but we have played some really good cricket: Virat Kohli

Virat Kohli felt India have “played some really good cricket” in the last three matches where they registered thumping victories over Afghanistan, Scotland, and Namibia, after two embarrassing losses to Pakistan and New Zealand, wherein the players “weren’t brave enough”.

“I know we haven’t got the results here but we have played some really good cricket. The guys have really made my work easier. The way we played the last three games, it’s a game of margins – T20 cricket these days. Two overs of attacking cricket at the top is what we were missing in the first two games. As I said, we weren’t brave enough in those games and in the group we were in, it was tough,” he added.

India host New Zealand for a 3-T20I series from November 17 under a new captain, who is yet to be announced, and a new coach, Rahul Dravid. Virat Kohli, KL Rahul, Jasprit Bumrah, Mohammed Shami are likely to be rested for that series.