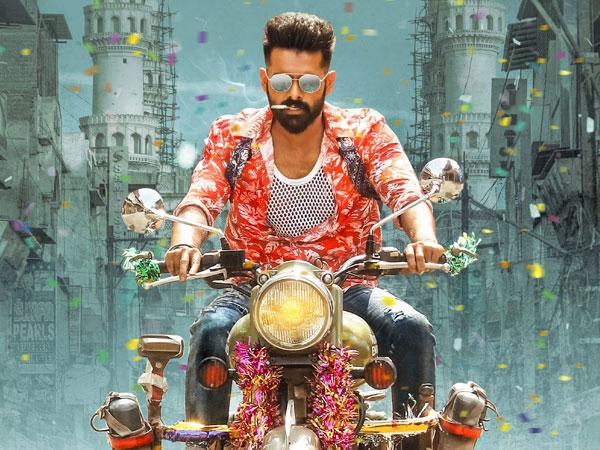 Story: Shankar (Ram Pothineni) is a criminal wanted for the murder of an ex-Minister. While he doesn’t shy from killing for money, what happens when he loses something dear to him?

Review: With iSmart Shankar Puri Jagannadh aims to bring the story of a flawed, seemingly heartless criminal, who happens to fall for the only girl who will not put up with his nonsense. But what happens when said criminal finds out he has not just been paid to kill someone, but been used as a pawn in something far more sinister? With a plot like that, one expects the film to be fast-paced and maybe remotely logical. But with iSmart Shankar you get anything but that.

Shankar (Ram Pothineni) is a criminal who doesn’t shy from making enemies. He mouths dialogues in an annoying manner while offing his enemies and is bronzed orange. His double-toned jeans and gaudy shirts happen to come across a civil engineer called Chandini (Nabha Natesh), someone who’s unafraid of him and his nonsense. But of course, she eventually falls for him even if his favourite pastime is to frustrate her beyond belief. On the other hand are CBI agent Anand (Satya Dev) who’s working on Shankar’s murder case and his girlfriend Sarah (Nidhhi Agerwal), a neuro-scientist, whose invention is crucial to this tale. There's also a mystery plot that Shankar must unveil that is so predictable, it's funny how you can smell the conclusion from a mile away.

The issue with iSmart Shankar lies (surprisingly) not in the fact that the protagonist of this tale is such an uncomfortable and unlikable character that he believes threatening women with rape and objectifying their body is what makes them fall for him. And Puri would have us believe it works, even if he never pretends that Shankar is supposed to be likable. He even offers explanation for why Shankar could be the way he is in a throwaway dialogue but never takes away the discomfort. The bane of the film is however its core point which both requires you to stay engaged and expects you to suspend disbelief. But even in this make-believe world, when rules change by-the-minute, it’s hard to give a damn. To make matters worse, the long, tedious journey one goes through to find out something you already predicted doesn't make it any better.

Ram Pothineni however gives Shankar his all, bringing in a kind of energy that makes it a delight to watch him on-screen, even at his most-disgusting self. He especially comes through when the film requires him to showcase massy dance steps in horribly ill-placed songs. He also breezes through the very few emotional scenes in the film and the numerous comic ones. Satya Dev’s character never gets a chance to flesh out much, remaining a caricature of what an agent is supposed to be like. Shame, seeing as how well he can act! Nabha Natesh and Nidhhi Agerwal’s characters too suffer from a similar syndrome where despite much being made of their professions; they only serve the purpose of being the perfect misogynistic male-fantasy. Nabha however delivers an earnest performance with what she’s offered. Nidhhi is plain okay.

iSmart Shankar is a loud, messy and pakka mass film that fails to take off. While Mani Sharma’s effective music and BGM adds to the noise (literally), it doesn’t do much to help the film. Give this one a chance this weekend if you’re a Puri, Ram or Nabha fan, you might find the patience needed. If you’re looking for anything remotely logical, feel free to give this one a miss..

we can see this movie both hindi and Telugu Languages

6
Most Recent
Top Comments
Processing
Voice note recorded successfully
Record
Recording 00:00
Commenting has been turned off for this post.
Categories
Read More
Other
How to improve your OH&SMS according to ISO 45001 Certification in Singapore Can Fit Into Your Organization?
What is ISO 45001 mean?ISO 45001 Registration in Ahmedabad is an International Standard that...
By Ganga Devi 2020-06-10 08:56:42 0 239
Blog
official online marketing pal site
official online marketing pal siteonline marketing pal ppc consultantpay per click consultantppc...
By Mitchel Samuel 2022-03-07 10:59:43 0 25
Other
Unable to Access AOL Email on IPad. What to do?
IPad is one of the most trusted Apple product that has gained huge appreciation worldwide. People...
By Ella Smith 2019-11-28 03:23:37 0 273
Other
We Tell Continuous Vulcanization of Rubber Curing Oven
Vulcanization is process of converting natural rubber or rubber polymers into more durable and...
By Na1 Bai 2021-09-03 09:28:52 0 74
Shopping & e-Commerce
The automobiles in Rocket League have one among
The automobiles in Rocket League have one among six distinct hit containers, however generally...
By Worldofwarcraft Lee 2021-04-07 01:51:26 0 126