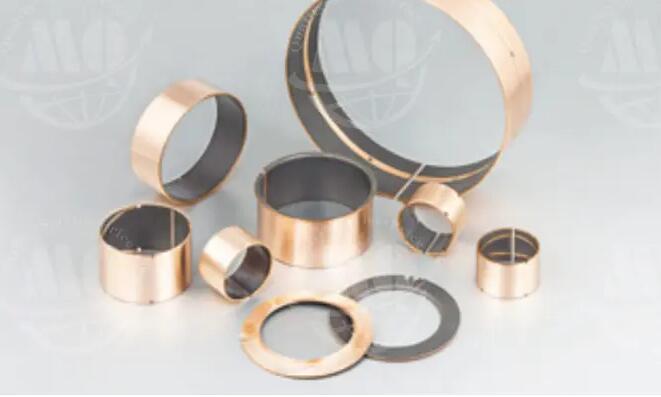 Bushings can also be another name for sliding bearings. Different materials are used as bushings, and their sizes, suitable working environments and pressure-bearing capacities are different; unlike ball bearings, they use different According to the principle of different sliding friction coefficients between materials, reasonable materials are selected to reduce the friction between the shaft and the bearing surface while ensuring the bearing capacity between the shaft and the bearing surface.

Oilless Bushings are an improvement of copper bushings. When designing, Oilless bushings will be selected if the load is light. Oilless bearings are generally used at low loads and low speeds below 1000 rpm.

Most Oilless Slidings now are steel plates, with spherical bronze powder sintered in the middle, and some other substances sprayed on the surface, such as a mixture of polytetrafluoroethylene (PTFE) and lead. It has the characteristics of a small friction coefficient, good wear resistance , good corrosion resistance and Oilless lubrication. It is mostly used for sliding parts of various machinery, such as printing presses, textile machines, and fitness equipment hydraulic trucks. Some bushings are specially processed, which can withstand high-speed movement, but cannot withstand heavy loads.

Oilless bushings are characterized by:

It can also be used in harsh temperature environments of high and low temperatures;

Can be used for linear motion and rotary motion;

Jiashan Minqin Oilless Bearing Co., Ltd. is an Oilless Bushing Manufacturer, and also has Oilless Sliding Bearing and other products. Welcome to visit our official website.